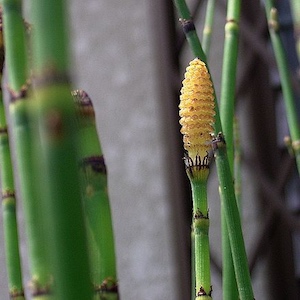 Before you is an extensive stand of Equisetum hyemale, commonly called horsetails. In fact, the horsetail is a living fossil and the only surviving genus of the Equisetaceae family of plants. Three hundred million years ago, they were one of the most important plant groups of the Paleozoic era, some reaching the height of towering trees. Horsetails don’t produce flowers or seeds but reproduce by spores. This species of horsetail is also called Scouring Rush because in times past its rough texture made it useful for scouring things clean. It should not be confused with a similar looking but unrelated genus of flowering plants known as mare’s tail (also sometimes called horse’s tails).

For more information on horsetails.