Trees can live to venerable ages. Some of the magnificent Douglas firs of Vancouver Island's Cathedral Grove have been around for more than 800 years. Starkey land has been pastured, logged, replanted, and managed for maple syrup for more than a century and a half, so its trees are relative youngsters. Nonetheless, the impressive beech, ironwood, sugar maple and black cherry trees you see before you represent some of the most mature trees in the forest and command our reverence and respect. Hopefully future generations will one day see their graduation from "Chapel" to "Cathedral" status. Ash trees, which used to grow here until they came under attack by the emerald ash borer, have sadly had to be cut down to contain the spread of this destructive beetle. 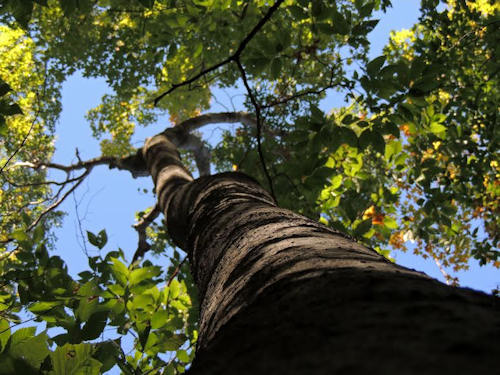 A pillar of the Chapel
(photo Bob Fanning)

To learn about the emerald ash borer and the damage it does, go to https://en.wikipedia.org/wiki/Emerald_ash_borer

And if you want to see an example of the gigantic trees in Cathedral Grove, MacMillan Provincial Park, Vancouver Island, B.C., go to https://en.wikipedia.org/wiki/MacMillan_Provincial_Park